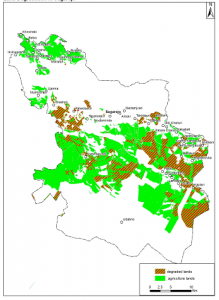 Sagarejo Munipilatiy: Covering an area of 155,369 ha, the municipality is situated in the western part of the Kakheti region. The major land covers are cropland-grassland mosaic (71%) and forests (29%). The municipality has a population of 59,400, and the main economic income of the municipality is agriculture. Rangeland sums to 56,884 ha, of which 40% is degraded due to overgrazing, 400 ha of arable land is degraded because of water and wind erosion and salinization, about 70% of windbreaks have been destroyed. Wheat, seed corn and sunflower are mainly sown in Sagarejo. Internal irrigation networks have fully collapsed, which adversely affect productivity and agricultural production. 34% of agriculture lands are privately owned, 61% of lands are state-owned, and 5% is the municipality property. The comparative lack of perennial plants in Sagarejo district is also reflected in the structure of existing orchards. Apples, and hazelnuts, which have significant revenue and export potential, are not grown in the region anymore.

In Sagarejo Municipality 6,094 ha from total agricultural land is private, 38,288 ha belongs to the state (source: municipality of Sagarejo). Homestead areas in total covers 1,430 ha, of which 889 ha is arable, 447 ha under perennial crops, hayfields – 10 ha, pasture – 84 ha. 53,039 people live in agricultural households in Sagarejo (Agricultural Census of Georgia. GeoStat, 2014). These households are the main workforce of the agricultural production. There are 13,549 household holdings, which make-up 99.3% of the total number of agricultural holdings (13,639). Natural meadows and pastures (40,766 ha) is the dominant land category (64.2%), followed by arable land (19,450 ha). 16.6 % of arable land (3,229 ha) is under permanent crops and, 0.005% (1 ha) greenhouses. Total land operated by agricultural holdings under annual crops is around 11,711 ha. Cereals (9,428 ha) are the dominant crops in Sagarejo. Sunflower (788 ha), vegetables (442 ha) and fodder crops (366 ha) are the next major annual crops. Total agricultural land under permanent crops consists of vineyards (3,025 ha) followed by orchards (184 h). 58% of agricultural land operated by agricultural holdings (9,355 ha) is in need of irrigation water, which severely impacts production capacity of those lands.