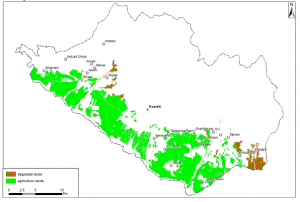 Kvareli Municipality: Situated on the eastern border of Georgia, covering 96,500 ha, with 35% grassland-cropland mosaic and 65% forest area. The municipality is sparsely populated with 37,658 people. The municipality’s land is severely degraded because of water erosion. Land degradation is affecting the community of Kvareli because 80% of the population depends on agriculture in the municipality. Agriculture is predominantly viticulture in Kvareli municipality. The old vineyards are very sparse, and their productivity is low (2-2.5 t/ha).

The number of population living in agricultural households is equal to 30,500 (Agricultural Census of Georgia. GeoStat, 2014) in Kvareli Municipality. These households are the main workforce of agricultural production. Total land operated by agricultural holdings under annual crops occupy 7,005 ha. Cereal production (5,420 ha) is the major annual crop. Total agricultural land under permanent crops consists of vineyards (4,502 ha), followed by orchards (1,635 ha) and berries (64 ha). Only 5 ha of land is occupied by nurseries of perennial crops. Currently, nearly half of the holdings (4,525 ha agricultural land) are in need of irrigation water.

Animal husbandry is the second major field of agriculture, which use considerable agricultural land, especially pastures and hay-lands, but also require arable land for fodder production. Kvareli municipality leads in  beekeeping and honey production in Georgia with 11,078 beehives.