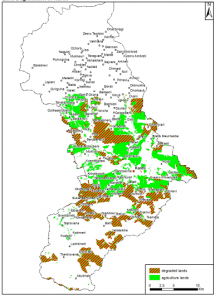 Kareli Municipality: The municipality is situated in the centre part of Shida Kartli and covers 111,000 ha[1]. Agricultural lands in Kareli Municipality cover 36,407 ha[2], including 18,302 ha of arable lands, 4,678 ha of perennial plantations, 1,764 ha of hayfields and 11,762 ha of pastures. Forest area covers 26,746 ha. The population of Kareli municipality is 51,600, and the main economic activity of the municipality is horticulture. Agriculture provides 70% of the population’s livelihood. Kareli is suffering from severe land degradation due to water and wind erosion (8,677 ha), and salinization (450 ha)[3]. 80% of windbreaks have been destroyed. Key crops include wheat, corn and barley. Horticulture plays an important role in the agriculture sector. Farmers grow apple, pear, and peach.

[1]Some northern territories of the Kareli municipality are part of a self-proclaimed republic of South Ossetia (currently under de-facto control of Russian Federation) and have not been under control of the Georgian government since 2008.

[2]The agricultural land of 36,407ha lays within an area of roughly 66,800 ha (out of total 111,000 ha) of the Kareli municipality that remains under direct control of the Georgian government.