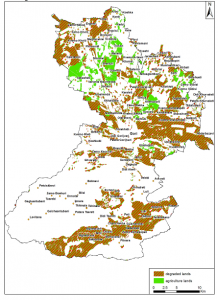 In Gori municipality, 81,912 people’s major income source is agriculture[3].  Arable land (14,790 ha) is the dominant agricultural land category followed by land under permanent crops (33.4%) and natural meadows and pastures (14.5%). Cereal (6,217), and maize (3,208 ha) are the major annual crops in Gori. A considerable area of arable land is used for cultivating vegetables (2,538 ha). 29.5% of the total arable land is uncultivated. Orchards (9,062 ha), and vineyards (255 ha) are major permanent crops in Gori. One of the main parameter supporting high land productivity under agricultural production is the provision of irrigation water.

[1] Some northern territories of the Gori municipality are part of a self-proclaimed republic of South Ossetia (currently under de-facto control of Russian Federation) and have not been under control of the Georgian government since 2008.

[2] The agricultural land of 61,902 ha lays within an area of roughly 135,200 ha (out of total232,720 ha) of the Gori municipality that remains under direct control of the Georgian government.